I welcome you all to a new regeneration of cycle Torah readings! This is another one of the many interpretations of the Scriptures from the light of Ras Tafari by, I, Lidj Yefdi (or Yefdeyah). I assure you that if you are patient with me, come with a willing mind and heart(ready to learn), you will receive more than what you might have asked for, in seeking the perspective of a Ras Tafarian’s I-sight (eyesight) into the study of the Scriptures. So, with this Hebrew Shabbat (or Sabbath day) if those who actually open up their Bibles to read in a Jewish/Hebrew cycle of readings, & thoroughly discern, have come to the opening of the Torah portions with BeHa’alōtecḥâ – בְּהַעֲלֹתְךָ, from a Jewish/Hebrew mode of study for those out in the diaspora, living outside of Jerusalem or Israel.  From the Jewish or Hebraic Calendar in the 5782, this Sabbath day would probably fall on the 18th – יח, & on the 19th – י״ט , of the month of Sïw[v]án – (סִיוָן) for this week, in this mode of study; for those out in the diaspora or outside of Jerusalem/Israel. (The Hebrew Calendar corresponds to a Lunar cycle of the Moon) &, from an Ethiopic-Christian perspective, in what may be known as the year 2014/2034/7514, on the Ethiopic calendar.  This calculation, with its readings from the Scriptures, would align to Sítlläkʷ’s – ስትለኵስ; on the 10th – ፲, & on the 11th – ፲፩, of the ወርኀ(Wärha – month) of Gínbōt – ግንቦት, for this Sabbath (or Senbet – ሰንበት) in the Ethiopian language of Amharic which is currently one of the languages of the Ethiopian Orthodox Tewahedo Church(the other language being Ge’ez – ግእዝ).

In this week’s portion of the study of the Scriptures, Moses is instructed by God to tell his brother, Aaron to light the seven lamps for the candlestick(Menorah) in the Tabernacle.

& Aaron, did so; lighting the lamps.

Moses, is then also instructed to sanctify the priesthood (Levites) before the entire assembly of the children of Israel.  The children of Israel outstretched their hands forth to consecrate the blessing & cleansing of the Levites among the Hebrews, also for their service in the Tabernacle.

The Levites were taken by God to be the firstborn among the children of Israel.  The priesthood were to adhere to Aaron and his sons, and conduct the services and duties in the Tabernacle.

The laws, commandments, and statutes, for the appointed season of the Passover were given to Moses for the children of Israel, in the wilderness of Sinai.  The laws were given in the first month(Abïb/ Nïsán) of the second year of the Israelites’ coming out of Egypt.  The fourteenth day of this month was when the Hebrews were to keep the memorial of the Passover.  (even in the wilderness)

God then spoke to Moses, saying, speak to the children of Israel, that they make two (2) trumpets of silver; for they would be used in the calling of the assembly & for the journeying of the camps.  The rules for the blowing of these trumpets would find an alignment different from that of the blowing of the Shofar. 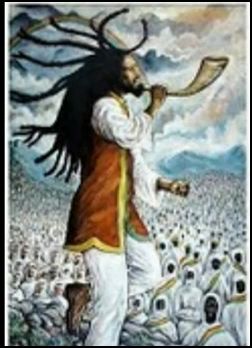 The children of Israel then began to complain, and grumble for they had begun to forget the ways of God; how and why he brought them out of Egypt.  Their complaining kindled the the anger of God.

Now, the mixt multitude went lusting after their old ways, even from their captivity. (even after the fire at Taberah)  Yet now, in this study portion of the Scriptures the children of Israel wept again; now, for they desired flesh to eat.

God then sent a wind that brought quail to the children of Israel, & they did eat but, while the meat was in the process of consumption, a plague of death fell upon them; so much so that like Taberah – תַּבְעֵרָה, the place where the children of had fell away from the grace of God here was named Kibrot Ha Ta’aw[v]ah – (የምኞት መቃብር _ YeMígñoch MäQábr) קִבְרוֹת הַתַּאֲוָה‎ , or in translation the ( graves of lust ).

At this point, from the place of the children of Israel’s graves of lust they saw it fit to move on; and so, the Israelites journeyed on to Hazeroth (ሐጼሮት/ חֲצֵרוֹת).

Here, Moses’ sister and brother spoke against him, for he married an Æthiopian woman.

God was angered, so that he spoke to Miriam, Moses, and Aaron.

But, upon his departure Miriam, Moses’ sister became leprous.  Aaron, Moses’ brother pleaded with him, for Miriam’s case & Moses prayed for his sister to be healed of the disease .  God gave grace and said that, seven days, Miriam should be set outside the camp; once she was healed, she could return.