This portion of our studies in the Scriptures, will conclude the first of Book of Genesis.  While continuing study in the last Torah portion of Genesis the study deals with Jacob‘s(Israel) tenure in Egypt.  Jacob(Israel), felt that the time drew near to his death, so he spoke to his son, Joseph; telling him of an obligation he would like his son to fulfill.

Jacob(Israel) desired to be laid to rest among his ancestors in the land of Canaan, which God has promised that his descendants would inherit.

Joseph, after speaking with his father, Jacob(Israel) and taking into account that his father drew close to his death; Joseph brought his two sons, Manasseh & Ephraim to him.

Jacob(Israel), told his two grandsons [Manasseh & Ephraim] to come closer for he would bless them according to the covenant he received from God and his ancestors: Abraham & Isaac.  Oddly, Jacob(Israel), blessed Ephraim, the younger son, in the place of the elder son, Manasseh.  Even, after the attempts of Joseph, who noticed that his father blessed his younger son in the place of his eldest and vice-versa.

After blessing his grandchildren, Jacob(Israel), then proceeded to bless all of his children, as well.  Each one receiving a blessing, pertaining to themselves. 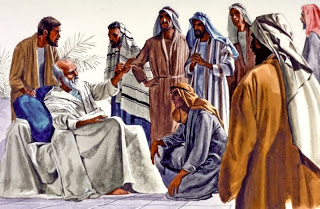 Jacob(Israel), then died in Egypt & Joseph, made preparations for his body & burial, but more importantly the fulfillment of his oath to his father.  Because Joseph, was such a great man of stature in Egypt, the passing of his father was a grievous thing among the Egyptians.*  This was so much so, that when Joseph, went to Pharaoh and told him of the oath that his father wished him to fulfill, Pharaoh allowed it, even allowing many of the elders of the house, and of the land, along with servants of the house to go with him to Canaan.  But, upon arrival into the land of Canaan, the Canaanites saw the people that brought up Jacob(Israel), from Egypt, & they saw them mourning at Atad….& said “this is a grievous mourning for the Egyptians.”*  This day brought about the name of “Abel Mitz’raim – אָבֵל מִצרַיִם,” which translates to the “Meadow of Egypt“, or the “Mourning of Egypt.“  All in the procession for the remembrance of the passing of Jacob. [the Patriarch of Israel]

Joseph’s brothers, thought surely after their father’s passing that Joseph would in one way or another return the favor for their jealousy of him from their past.  But Joseph did no such thing, but returned to Egypt & witnessed the birth of his other grandchildren and great-grandchildren until his Joseph’s passing in Egypt.  Joseph also made oath with the all of Israelites; that they should bring his bones out of Egypt & lay him to rest with his ancestors in the land of Canaan. [as his father Jacob, did] 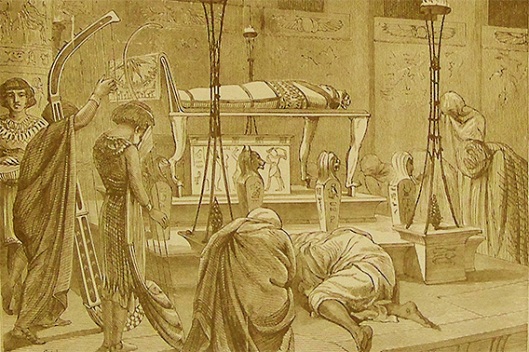