I welcome you all to one of the many interpretations of the Scriptures from the light of Ras Tafari by, I, Lidj Yefdi (pronounced Lij, Yef-dee). I assure you that if you are patient with me, come with a willing mind and heart(ready to learn), you will receive more than what you might have asked for, in seeking the perspective of a Ras Tafarian’s I-sight (eyesight) into the study of the Scriptures. So,with this Hebrew Shabbot(or Sabbath day) if those who actually open up their Bibles to read in a Jewish/Hebrew cycle of readings, & thoroughly discern, have come to the Torah portion of W(V)ayeira-וַיֵּרָא.  On the Jewish or Hebraic Calendar in this year 5774, this Sabbath day would probably fall on the 14th-יד, & the 15th-טו, of the Hebrew month of MarKH’eswan-מַרְחֶשְׁוָן, or simply known as “KH’eshwan-חֶשְׁוָן,” for this week, in this mode of study; for those out in the diaspora or outside of Jerusalem/Israel.  (The Hebrew Calendar corresponds to a Lunar cycle of the Moon) &, from an Ethiopic-Christian perspective, in what may be known as the year 2006/2026/7506, on the Ethiopic calendar.  This calculation, with its readings from the Scriptures, would align to the 8th-፰, & the 9th-፱, on the (ወርኀ)month of T’Q’imt-ጥቅምት.  In the Scriptures, what is also known as TegeleT’elet-ተገለጠለት. The Ethiopic calendar is solar (with its correspondence to the Sun) aligns to this Sabbath (or Senbet-ሰንበት) in the Ethiopian language of Amharic, which is currently one of the languages of the Ethiopian Orthodox Tewahedo Church (the other language being Ge’ez-(ግእዝ).

We pick up where we left off, from the last Sabbath portion, LeKH’-LeKH’a & come to Wayeira-וַיֵּרָא.  In this study of the Scriptures, Abraham is visited in Mamre, 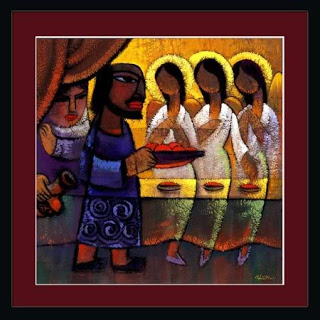 Abraham is asked of his wife, Sarah‘s whereabouts, because a special message is to be delivered.  She is to bare Abraham a son, though the both of them are aged.

In this kifil/parsha(portion), Abraham found himself playing the role of an “intercessor” before the destruction of Sodom & Gomorrah, for the sake of his nephew, Lot, & his family.

After the Sodom & Gomorrah‘s obliteration, Lot was left with only his two daughters.  They feared that wouldn’t be married, so they, the two daughters devised a plan to procure children from their father’s lineage.

Meanwhile, Abraham passes off his wife, Sarah, for his sister; in the hopes that it would spare his life, to a king named Abimelech.  God, speaks to Abimelech in a vision of sleep, & informs him that Abraham, and Sarah are not brother and sister, but husband and wife.  Also, because of their presence in Abimelech‘s kingdom, all of the wombs were closed up.  Abimelech, of course, confronts Abraham for this, but they both are reconciled with each other and even, make a covenant between them in Beersheba.

Sarah, then gave birth to a son of Abraham, and named him Isaac.  Hagar, who was Sarah‘s handmaiden, but had become a mother of Abraham‘s firstborn son; mocked her, in that she gave birth in her old age. 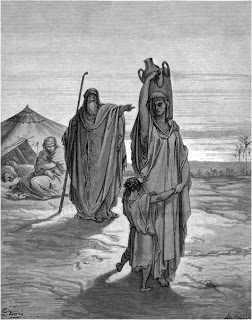 Later, Sarah remembered the callous feelings between she, & Hagar, whom had bore a son,(Ishmael) to Abraham.  Sarah, feeling as if she placed a burden on Abraham that he shouldn’t bare, told him to cast woman & her child.  Abraham, grievous because of what it seemed like he may have to do, but received assurance of God, that the woman & her child would be preserved.

Abraham & Abimelech, made a covenant in the place near where Hagar & Ishmael, were spared by God, from the desert, & an altar, which Abraham Jehovah Jireh(from translation).

God, did also test, Abraham; to the point where Abraham’s love for his son & God, was the ultimate test.