So,with this Hebrew Shabbot(or Sabbath day) if those who actually open up their Bibles to read in a Jewish/Hebrew cycle of readings, & thoroughly discern, nonetheless studied either the Torah portion of Ki-Tis(h)a-כִּי תִשָּׂא , from a Jewish/Hebrew mode of study for those out in the diaspora, living outside of Jerusalem or Israel. Others who engage this type of study more than likely read the portion of V(W)ayakhel. From the Jewish or Hebraic Calendar in the 5773 this Sabbath day would probably fall on the 26th & 27th of the month of  Adar-אֲדָר . (the Hebrew Calendar corresponds to a Lunar cycle of the Moon)From an Ethiopic-Christian perspective and calculation these readings from the Scriptures would align to what is known as BeQweT’erhachew Gizey–በቈጠርሃችው ጊዜ; on the 29th & 30th of ወርኀ(month)- የካቲት(Yekateet). On the Ethiopic calendar, which is solar (with its correspondence to the Sun) this Sabbath (or Senbet-ሰንበት) in the Ethiopian language of Amharic which is currently one of the languages of the Ethiopian Orthodox Tewahedo Church(the other language being Ge’ez-ግእዝ)

Now, for in summation of the study we have in front of us; In this portion of the study of the Scriptures, the men of the children of Israel were to make Atonement for them and their families. So, in turn, the atonement that was made by the men of the families could have been compared to a sort of census taking an account for the children of Israel. A half-shekel of silver was what was known to be used to donate to the sanctuary of Israel. The finest of spices and of oils, and these were to be taken for an anointment, as well. The ten of the Tabernacle was to be anointed, the Ark of the Covenant, along with all that was in the sanctuary. The Sabbath was to be continually kept, for how the anointing sanctified the Tabernacle; the Sabbath sanctified them to God.

More instruction for the construction of the fixings of the Tabernacle were run down to Moses in the portion of the Scriptures.  The bronze water basin was where the priests (Aaron and his descendants) were to wash before carrying out the duties that were to be done in service of the Tabernacle. Many can draw very close conclusions to how Christ wash the feet of the 12(twelve) disciples on Passover before he was betrayed to this way of service.{Putting Christ, in the seat of a High Priest;  [Melchisedeq]*}. The Anointing Oil was for the priests to be anointed before conducting the service of the ministry and for all the objects of the sanctuary. 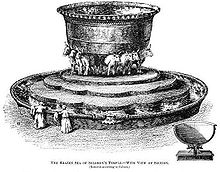 Moses, then speaks of two chosen to build for Israel, the sanctuary. Betz’alel, of Judah(son of Uri), and Aholiab, of Dan(son of Achiycamak); would build: the tabernacle, the ark, and all the furniture for the sancutuary, along with these: the garments of the priests, also.